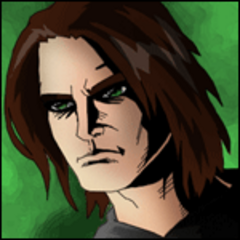 Aleister Mianar
Posts: 194
Aleister watched as the clouds parted and his Master stood at the top of the mountain. It validated every thought the young boy had in which he knew that he could trust in the Force, and in Dolash.

Before he could contemplate the excitement of this further a small metal object fell from the sky, and landed not far in front of him in the snow.

He glanced at it, squinted through the wind, and he realized that it was the hilt of a lightsaber. Aleister continued his climb, slowly but surely, and as he reached the area where the lightsaber was, he paused, only momentarily to scoop it up and place it on his belt, before continuing the upward climb.

The home stretch was upon him, and he rose, hand over hand through the final pulls, getting ever closer to his Master. 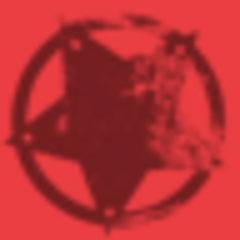 Dolash
Posts: 4291
At long last, Aleister's hands gripped the stony edge of the very highest peak of the mountain. He hauled his weary, frost-bitten body up that final obstacle and arrived, panting and gasping, at his destination.

When his vision cleared, however, he did not see his master waiting to greet him. The figure on the mountaintop was not Dolash after all - no, it was Han Skywalker.

Except this one was different than the man he had seen in dreams and visions. Twisted, pale, black-cloaked, sallow-eyed, his smile was cruel and in his hands he gripped a red-pulsing lightsaber. When he spoke there was no voice, just echoes and reverberation, leaving impressions and half-formed flashes of thoughts. A burning temple Aleister had never seen, corpses strewn about the grounds. Men and women he had never met engaged in battle. Starships filling alien skies, armies marching to fight forgotten wars. Han was there, wicked and insane, lightning arcing from his fingers as his lightsaber reaped wildly.

Through the torrent of images and sounds, a pattern began to emerge. Not unlike when a series of smaller images creates a larger one when taken in as a whole, the stream of sense data running through Aleister's head coalesced into one simple thought. I am your destiny.

As soon as this was understood, the apparition raised his lightsaber high and charged at his exhausted adversary. Aleister would have to fight or perish, but how exactly was he meant to win?

Aleister Mianar
Posts: 194
Aleister had little time to react, but had he the time, he would have understood that the apparation was simply that, something conjured through the Force, from his own fear, and the only way to conquer it was to reign in his own confidence, not arrogance, but confidence that he would not allow himself to arrive at that position.

He paused, and looked at the apparition.

He laid his lightsaber on the ground, and spoke only a few words before going into a meditative trance within the Force.

"You are not real. You cannot harm me."

Slipping deeper into the meditative trance, he knew that this was not meant to be a physical battle, but a mental one, as his own fear and doubt that it could possibly be true lingered in his head.

He found each thought, and silenced them, until only peace and understanding remained.

Dolash
Posts: 4291
The apparition screamed and shrieked. It swung its lightsaber at Aleister, but the blade passed ethereally through the quiet, calm youth. With each swing the being became fainter, became quieter, and as Aleister's thoughts of peace grew and expanded the spirit was driven before it. Exorcised completely, the spirit disappeared off the edge of the mountain and into the enveloping fog.

The storm seemed to slacken. The ice and rain slowed to only a drizzle, and the wind becam but a breeze. The fog remained thick but it no longer spun and swirled at terrible speed around the mountain, settling into a more reserved pattern. The thunder stopped, and with one final flash of lightning the storm seemed to break around him at last.

There was light. There was crisp, cool air. Cold still, ever so cold on an ice world, but it was liveable again. The perpetual twilight was lifted revealing a cool night's sky. The feeble outline of the temple ruins on the mountaintop became brighter and less threatening as snow gently settled back on top of it. Now the storm had passed, and Aleister - like the mountain itself - had endured and allowed it to pass over him.

He was simply there, and there was no question of where he had been. When he opened his mouth, it was to speak to his student with an unfamiliar, rough voice. "You have done very well, Aleister. You endured a great deal. More, perhaps, than might be expected of you. I confess to genuine doubts when you came here, I did not think you would have the patience or determination to see things through. That much, you have proven wrong.

"There is some genuine spark of possibility within you, not tied to bloodline or the blessing of the Force. I have seen the sons of dynasties and the bearers of great Force gifts in the past come to nothing for want of such a spark. It is not enough on its own, but it is sufficient to deserve recognition."

He placed a large, mitted hand on Aleister's shoulder. A soft touch despite his size. Dolash smiled, and his eyes were lit with emotion. "I believe you have learned all you can from me, from this place. I do not think you could gain any more by staying, though you may yet come again in the future. You are not ready yet though, no. More lies ahead. Much more, should you continue to shelter that precious spark of yours. Tell me, Aleister, for I wish to hear. How are you? How do you feel? And are you ready?"

Aleister Mianar
Posts: 194
Aleister breathed, truthfully real air for the first time since his mountain climb began. He looked up at his Master and he smiled.

"I don't know about ready for anything, Master, but, I have tasted something far greater than myself." He saw Dolash raise an eyebrow and he explaiined.

"Knowledge, peace, and serenity. It is something i have not had the luxury of feeling my first 16 years of life, but, In the short period I have been here, I have learned more about myself and "The Force" than i previously knew, by leaps and bounds. I can only hope that I do not embarass myself attempting to learn as much as I can."

"And I still have MUCH to learn before that happens. Master, If I have learned as much as I can here, Where do you recommend I go next?"

Dolash
Posts: 4291
Dolash merely smiled back. The clouds above cleared, and a single beam of crisp blue light fell upon them both. Squinting against the bright light, a dark outline was visible now hanging above them both. It was a ship, and the roar of its hovering repulsors grew more audible over the quieting storm. "I have made arrangements."

A ladder made of strong nylon cord rolled down towards them. "Go. The ship's captain is an old friend of the order. He will take you to the nearest civilized system, and then - as a Jedi - you will be free to follow your own path. You know enough now to hear the voice of the Force wherever you go. Listen for its guidance and it will lead you to your destiny, no matter the twists in your path."

The Jedi Master took a step backwards, out of the cone of light. "You still indeed have much to learn, but there is one particular lesson you will require before I could teach you any further. Go out into the galaxy, Aleister. Find something worth fighting for, something for which you would make every effort, and lose. You needn't lose by intention, the galaxy is a hard enough place that lost causes are easy to come by. Do not wonder if you have learned the lesson I ask, when it happens, you will know. Find something right, give it your heart, and lose. Farewell, Aleister. May your path be clear to you."

Another step backwards, and he was gone - lost in the dark of night, down a shadowy crevice of the mountain. They may well never speak again.

Aleister Mianar
Posts: 194
Aleister bowed to Master Dolash as he dissapeared, then climbed the ladder to the shuttle. It would be a couple days until they reached their destination of the nearest system, so, he slept as long as he could, real rest, though the meditative trances seemed to have been as fulfilling.
As he slept his dreams were torn by two visions.

First, of the men that had helped him on a planet i believe they had called Yavin IV, who seemed to be some kind of rebel group bent on beating the imperialists.

The second vision, was of a man Aleister had never seen before, but he could see clear as day, his father, standing back to back in battle with this man, as friends, long before he had turned his back on them.

At all appearances, this man, was a Jedi, another like his father, and Dolash. He had two paths to choose from, and he decided that he would seek out this man, the one his father called Zark Ekan, and learn as much as he could from him. Perhaps after that, he would make his way to return to Bandor Kre'fey and the rebels to help their cause.

It would be two full days before he arrived at the nearest civilized system, and he mapped out a plan to reach the planet of Zark's residence as quickly as possible after that.