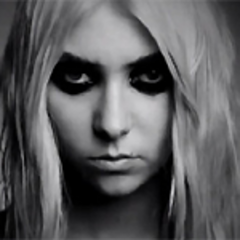 The curtain of night had fallen as a mild storm had rolled in from the East with a heavy rain falling from the sky. Thunder rumbled in the distance with the occasional flash of lighting that joined the seemingly endless chorus of rain and dripping water as it fell into deep puddles scattered across the mud.

Krystal stood motionless with her head tilted down and ran continued to rush down her dampened blonde hair and down her black coat until it fell to the ground. White eyes peered out from darkened black circles that surrounded them as she looked down to watch blood be washed away in the fast moving currents of water beneath her feet until it slowly faded to be forever forgotten.

Eyes slowly peered up to see two dead Jedi lying in the mud. Both had been slain by her Master after they had made the mistake to track them. One was a middle aged adult and the other a child of about eleven years of age who met a terrible end to the hands of a deadly Sith. Krystal felt nothing but hatred for them both as she glared at their bodies. It was two Jedi that murdered her parents four years ago and she would see every last one exterminated like the pests they were.

It begun in the late evening when loud voices were heard outside and the sound of sabers crashing against each other startled Krystal from her sleep. The bright flashes lit up her window and she soon let out a scream when the door one level below was kicked in. She could hear her parents yelling and her mother let out a chilling scream. Next came the sound of furniture being destroyed followed by sabers crashing together as they had down outside only moments ago.

“Mommy?! Daddy?!” Krystal was scared and was curled up in the corner to her bedroom as her door slowly opened to show the outline of a black cloaked man whose shadow covered Krystal’s small frame. She was shaking as he came closer only to hold out his hand. “Little one, your parents are dead.”

Tears filled the little girl’s eyes before she began shouting for them again. “Mommy!! Daddy!!”

“I’m sorry,” the dark man said softly as he knelt down in front of her. “Two Jedi killed your parents but I was able to stop them before they came up to kill you. Now you are safe, little one.”

“Who are you,” she asked as her vice quivered.

Krystal jumped and pushed her body more tightly against the wall behind herself.

“Do not fear me. I am your protector. We Sith are not the villains you have been told we are.” Dark eyes studied the girl. “The force is with you, little one. You know this. You can do things, can’t you? Things your parents thought were special.”

A faint smile could be seen in the darkness. “I know and I can show you how to use it to stop the Jedi from their murderous ways. You only need to come with me and I will see you have your revenge upon them.” A hand reached out to the girl. “Come with me.”

Krystal suddenly felt her fear subside. Her thoughts were still upon her parents and coping with their loss. She then could feel anger towards the ones who had killed them and she reached out and took the man’s hand who then led her downstairs to look at the bodies. Krystal’s head remained down as only her eyes glared from one body to the next. First she saw her father and then saw her mother. Then she looked at the two Jedi who had both been decapitated.

“Remember them as they are. It will make you stronger.”

There were no further tears as Krystal simply stared at her parents. Sorrow was exchanged for anger and the desire for vengeance. In that instance, the innocence Krystal had at the age of twelve vanished and her journey towards the darkside would soon begin.

“I want them all dead,” Krystal blurted out as the Sith placed his hand upon her shoulder and guided her outside.

A flash of lightning brought Krystal back from reliving her past and the memory only further enforced the hate in her heart. All Jedi, even the children, deserved to die as horribly as her parents.

Krystal’s red saber ignited and, in a fit of rage, she sliced off each of the Jedi’s heads from their dead corpses. After returning her saber to her belt, she picked up the two heads and hung them from a nearby branch where they could be easily found. They bobbed in the strong wind of the storm like silent chimes whose music had been forever silenced.

“I hate them,” Krystal said as her Master walked up behind her. “I hate them all.” 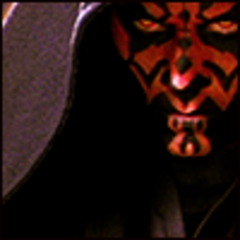 Darth Zeta
Posts: 1
“Use that hate… it will fuel you, give you power… strength… with power, you can do a great many things. Yet it is not your only source of inspiration. There is also The Sith Code. You will learn it, memorize it. The Code of the Sith, there are many known versions, but I will teach you the one I wish you to learn. Peace is a lie, there is only passion. Through passion, I gain strength. Through strength, I gain power. Through power, I gain victory. Through victory, my chains are broken. The Force shall free me.”

Zeta stood beside his Apprentice, whom he had been grooming for years through manipulation and hard work, and he was now being rewarded, having stripped her, continuing to strip her, of her soul.

“Let us hear if you understand the meaning to these words, my Apprentice… if you can value them as more than mere words... if you can also feel them, just as you can of the darkside. Tell me of your interpretation of the code..”

Her Master had yet to lay a cold hand to her. Thus far, Pierce had proven herself worthy. Devoted and disciplined. Yet she had a reckless streak, some wildness in her that needed to be controlled. It was a piece of the young woman that had yet to creep up. Should she turn a blind eye to her Master’s teachings, misbehave before him, she would truly know, and learn the power of the darkside.. first hand. The Iridonan was not above striking his student should he find reason to. A courageous and wise student, Krystal seemed to know no bounds. She would make a very powerful Sith one day. The cycle of student attempting to strike down teacher would one day happen, when his Disciple knew greed and power beyond what she so far knew. That day would not come for some time yet.  Though she was by no means pure any longer, there was still some innocence left within the young blonde. Innocence that Zeta would need to eliminate. It was a threat to him that he could not risk, particularly when it came to the enemy. An enemy she believed had taken her family, when the true culprit was standing right beside her.

Krystal Pierce
Posts: 2
Krystal faced her Master and knelt down before him, lowering her head knowing full the well the importance of the question. “I do indeed understand them, Master.” Her eyes slowly looked up in confidence into those of her Master’s for a few brief silent seconds before she would continue.

“Conflict forces one to better oneself. It forces change, growth, adaptation, evolution… or death. Peace is an agent of stagnation where conflict is a source of progress. The necessity of conflict is the law of the universe. I am a predator in search of conflict and reject all selflessness.”

“It is our goal to be stronger, to achieve our potential and not rest upon our laurels. We are the seekers, not the shepherds. I am a seeker, in touch with the laws of nature and see the truth of it all around me. My passion is what keeps me alive lest I become preyed upon.”

One who has freed themselves from all restrictions has reached perfection… their potential fulfilled. Perfect strength, perfect power, perfect destiny. I will break my chains to reach perfection and to fulfill my own potential.” With her own sense of ambition, her eyes looked up to the darkened sky above. “I shall become a true Sith’ari,” she added in a whisper heard only to her.

Krystal fully embraced the Sith Code and felt one with what it truly meant. Everything she had said she truly believed in and lived by. Her heart was as cold as stone and she craved more power to defeat those she deemed her enemies. She wanted to be feared and to use her power in creating that fear. Nothing but her own lust for power and revenge mattered.

Now remaining silent, Krystal awaited her Master’s approval with her answers… or his punishment.